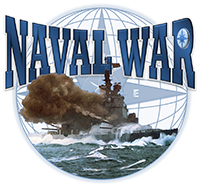 Naval War is a Tabletop Naval Miniatures Game designed to be played on a table-sized battle area with World War Two ship miniatures. The game rules and any aids needed for play are free and available for download on the site. The game is not tied to a specific miniatures line and is suited for many different game scales (1:1800 - 1:6000)

Naval War is a game, not a simulation. The aim of the game is to recreate the feeling and immersion you get when reading the battle reports of famous sea battle like the battle of the Coral Sea or the battle of the Java Sea. The focus lies on the action and on the ships on the table, so a lot of the technical details have been worked into easy to read data cards and quick game mechanics.

The heart and soul of the game is your fleet's Command Station which is used to issue order to your fleet and activate the different squadrons of ships, planes and subs. Let your fleet perform actions like maneuvering, attacking and launching carrier aircraft but also special Command station actions that will allow your fleet to perform above and beyond the call of duty: Perform evasive maneuvers as a response to enemy fire or appeal to the British sense of duty to keep your ship in the fight when others would have broken off. Try to place that one critical hit or lay down smoke to shield your carriers from enemy fire.

You are however not the only hero in this game; your opponent may (and will) try to disrupt your actions which may result in your attempt at flank speed backfiring because of an engine malfunction! This dynamic, in combination with the activation-based game sequence makes sure both players stay continually involved in the game. It also allows the players to have just that little bit of extra influence on Lady Luck. All this is built on the framework of solid game mechanics for modeling surface combat, air attacks and submarine actions with a balance between simplicity, gaming comfort and realistic outcomes.

The game is freely available for download for everyone who wants to give it a try. Gaming aids and Data cards are provided for ease of play and for more competitive or casual types point-based Order of Battles are provided to give easy acces to historically plausible fleet lists.

Naval War is a so-called ‘living ruleset’ so any suggestions, feedback and additions are taken very seriously resulting in regular updates and expansions. Crowdsourcing is also one of the strategies employed to generate content, so if you got this special ship, scenario, campaign or other contribution to the system, join the community and make it part of the game!