Before the game, both players assemble their command stations: They can choose up to 11 command station order cards  (one of which is reserve) in addition to the mandatory Fleet special Rule card. These cards make up your command station. They provide bonuses and abilities to your fleet.

At the start of the turn, both players check how many order tokens their fleets generate. These tokens can be used during the turn to play orders from the command station. Orders are the driving force behind Naval War. Any action taking place on the table is usually the result of a player issuing orders to his fleet assets. It also determines the flow of the game, since players will alternate playing activation orders. Since there is no strict sequence in which orders need to be issued (exept that there needs to be at least a basic- or advanced activation order being issued) there also isn't a strict seperation of movement, shooting and such in the game. It is perfectly possible to shoot first and then move, or exhaust all activation orders for a given squadron of ships before doing anything with the rest of your fleet. This models the chaos of combat and the fact that many factors effect the speed, rate of fire and dynamics of ships. It also allows the story of the game to zoom in or out of specific actions taking place. Ofcourse, the amount of things you can do with a ship is still limited within the general game turn, so you won't be able to perform two maneuver activations or two or more shooting activations within one game turn.

There are four different types of orders in the game: 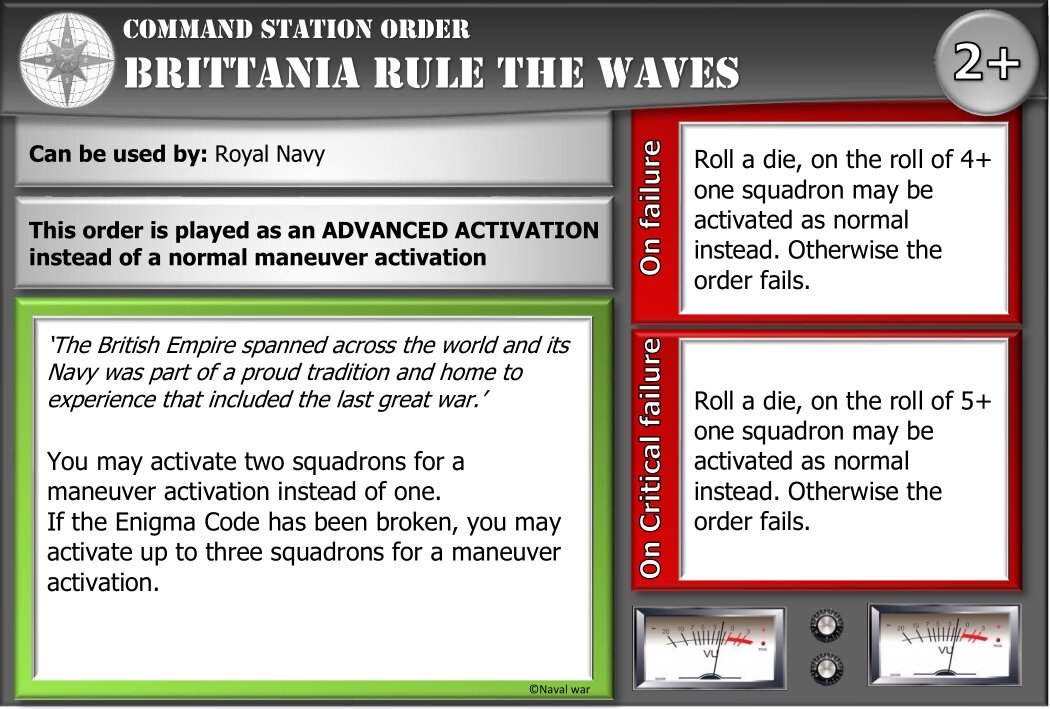 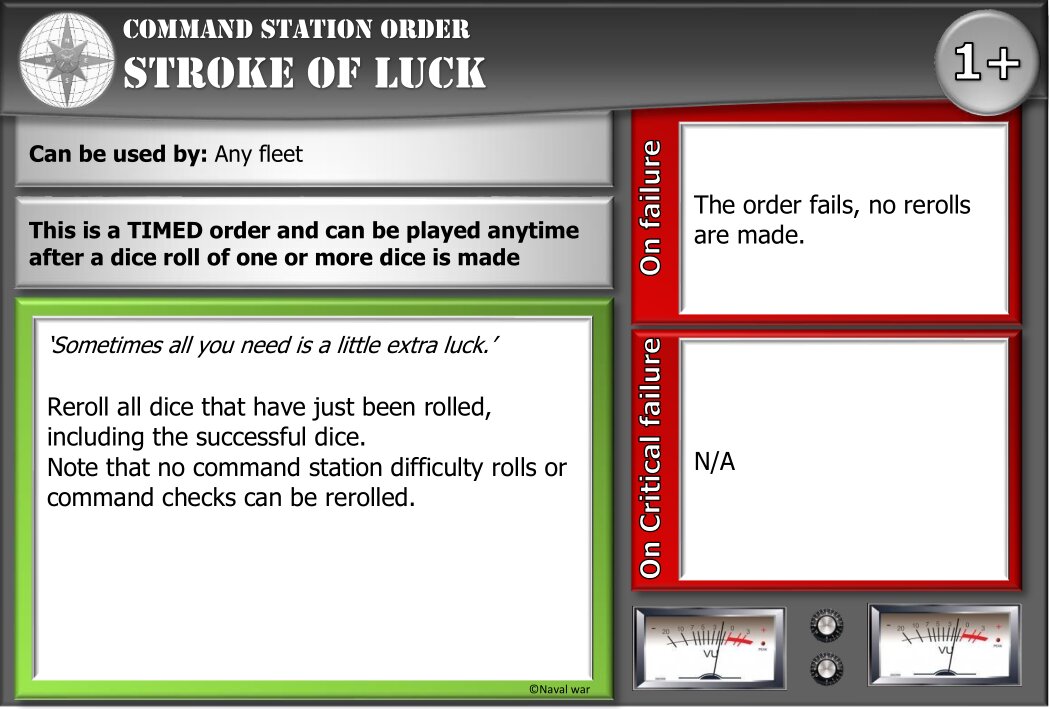 - Reaction orders
These orders can be used to as a reaction or interruption of an enemy activation order. It usually allows you to influence one of your opponents actions. Again, these orders will cost you one order token each. 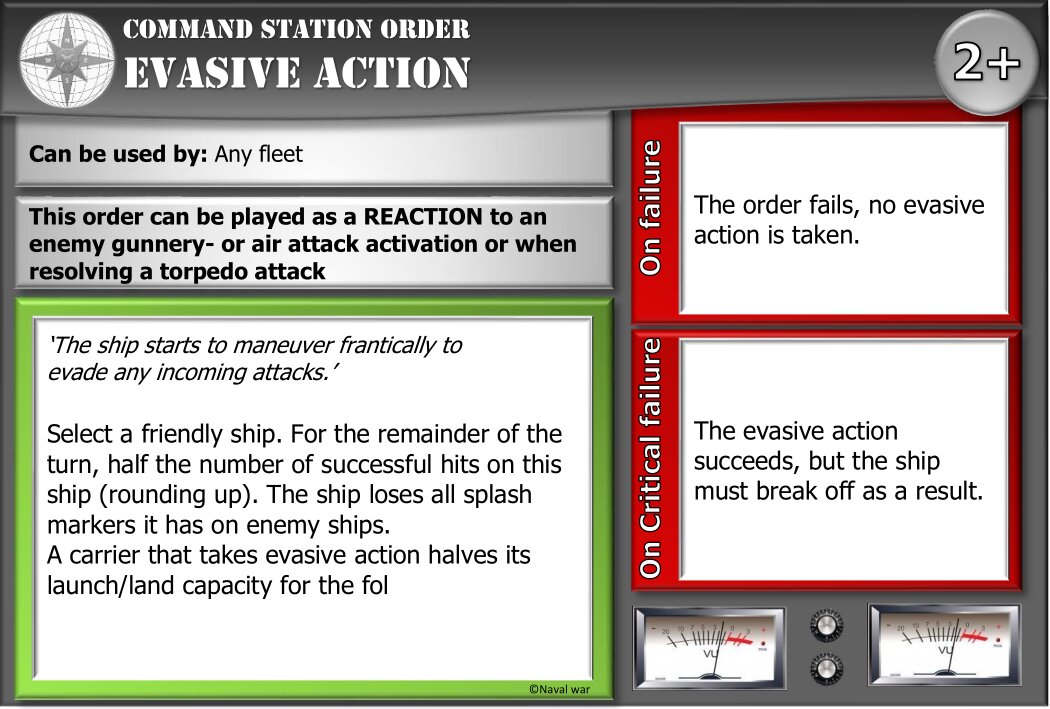 Most orders require one order token to play. It is allowed to perform orders multiple times in one turn, but no ship or squadron can perform the same order twice unless it is noted on the command station.

The idea behind all of this is that Naval Warfare was incredilibly unpredictable in WW2, ships and weapons would seldomly perform to their design specs and external factors like training, morale, weather conditions and just dumb luck would all effect the performance of your ships. The command station allows your ships to excel, but it also allows your opponent to cause ships to malfunction or orders to fail. To involve the opposing player in this game mechanic increases the drama and fun of the game instead of catching all kinds of negative modifiers into tables and such. This makes you really play against your opponent instead of playing against the game. To exaggerate a bit; It is no fun to blow up your own ship, it is however, quite a lot of fun to cause the enemy to blow up his ship at the least opportune moment.

Fleet special rules
Each fleet also has a unique Fleet special rule. This can be an order some other effect. It does not always require an order token to perform. Some special rules trigger upon something happening in the game, others are an order that need to be performed to function or confer their bonuses. These special rules are there to create a deeper level of gameplay within your larger strategy. It also functions as flavor for that particular fleet representing a glimpse of the overarcing tactics or strategic factors involved and introduces players new to naval history to the 'larger picture' of the war at sea. For instance, the Royal Navy can spend their excess disruption markers to cracking the Enigma Code, opening up advanced orders for the player later in the game while the Japanese fleet starts with excellent abilities which will diminish in time as losses pile up, reflecting the exhaustion of their personnel and material assets. 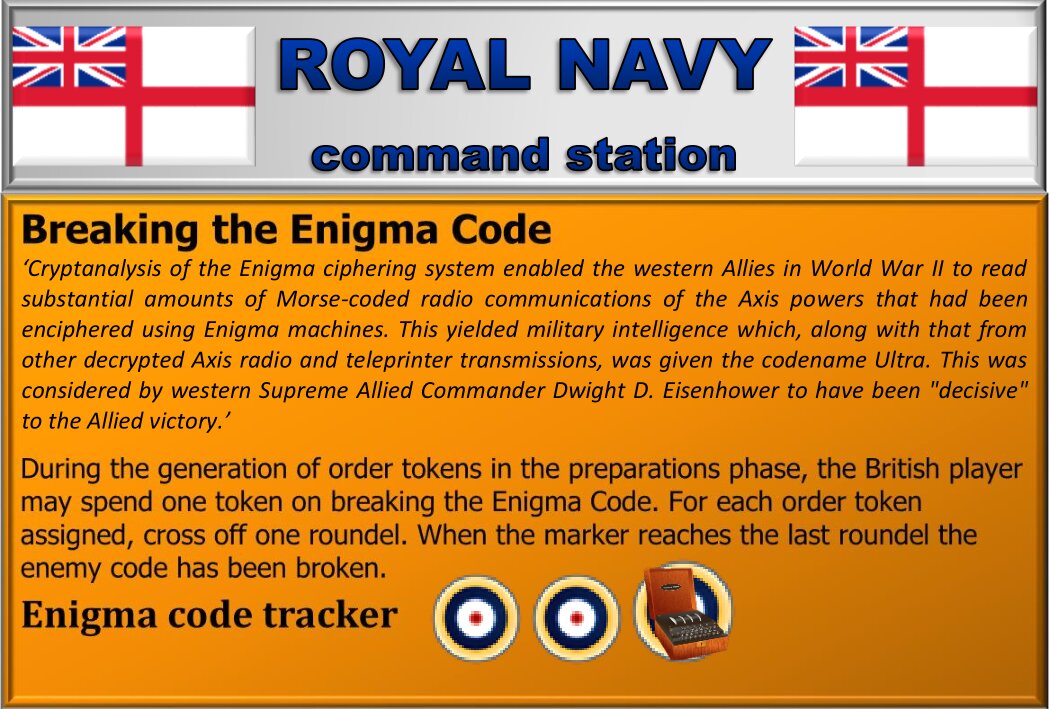 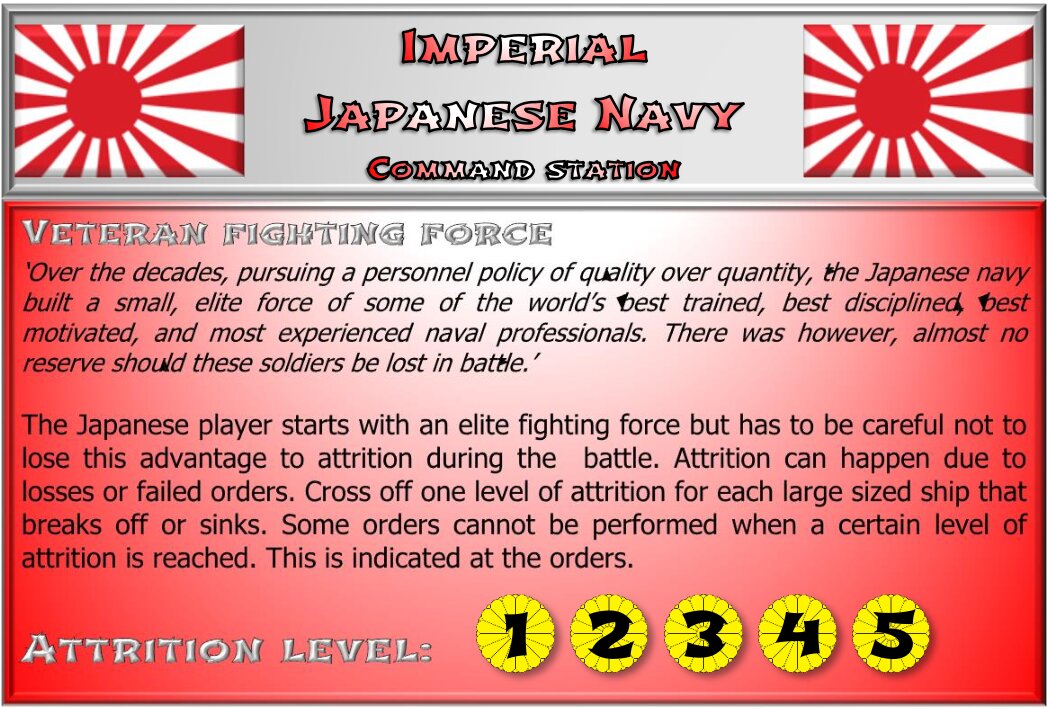 Officers
You can buy a commanding officer in your fleet list together with the rest of your ships, if you don’t, your fleet will be led by a Commander by default and, depending on your fleet composition, that might not always be the best choice. An officer provides your fleet with command ratings for small, medium and large vessels. Some officers might be more specialized in commanding one type of ship over the other. Besides their command ratings officers sometimes provide bonus tokens and abilities to fleets they command. Finally, your officer has access to Tactical tokens. These order tokens do not depend on the composition of your fleet and are one-time use only. Still, you can use them at any single point during the turn, so they can be game-changers. 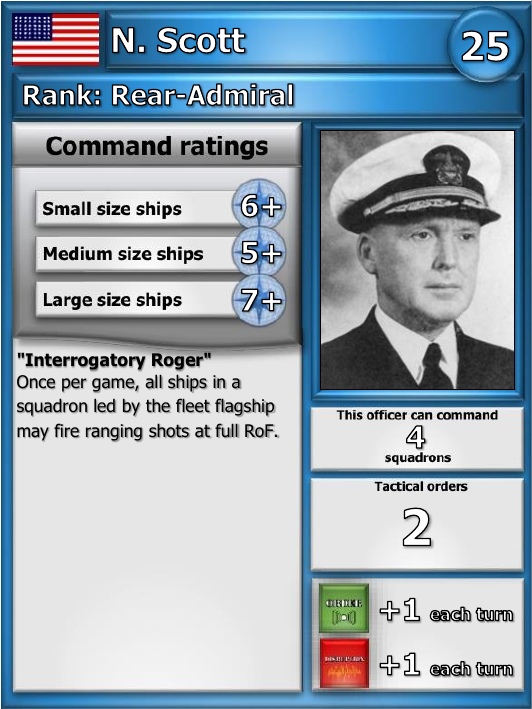 As you can see, the Command Station is the heart of the game and mastery of it will give you an edge in any given battle. It makes sure both players stay heavily involved and adds a lot of tension and drama to a wargame genre that is notorious for its mechanical gameplay. Make good use of your remaining actions to save up on order tokens, then use your excess tokens to boost the performance of your fleet while keeping a close eye on your opponent's pile of disruption markers.